Howdy & Happy Wednesday Y'all!
As always, welcome back to the Texas Connection. Grab your breakfast taco and read this week's interesting finds from your Pals at Texas Humor.
Want to share the newsletter with your friends? Send them this link.

No, I'm not crying because I just got my tickets to George Strait at ACL this year, it's just my allergies. Come back next week for more Tex-ventures, when (hopefully) my brain can think a little more clearly, because at this point my nose has been running a heck of a lot more than I have this year.

This week is really exciting because I am in Austin! I will be bringing y’all food from Austin, TX from now until further notice. With that being said, let me introduce y’all to La Patisserie. This small pastry business is adorable and delicious! Some of y’all may be familiar with La Patisserie because they have been featured in Austin Monthly, Eater Austin, and many other news stations. They currently have two locations, one in North Austin and one in South Austin, and y’all should definitely make the trip to visit them because it is 100% worth it. We went to their location on Annie street, but I’m sure both locations are similar in tastiness.

The first thing you notice when you walk up to La Patisserie is the bright pink building and french decor on the storefront. It looks exactly as one would imagine for a patisserie, and has abundant outdoor seating. One thing that I also noticed was a drive through option, which is great if you’re on the go! When we walked in the shop looked kind of empty, but that was quickly whisked out of my mind when I saw all of the pastries. Macarons, croissants, cakes, tarts, and more. 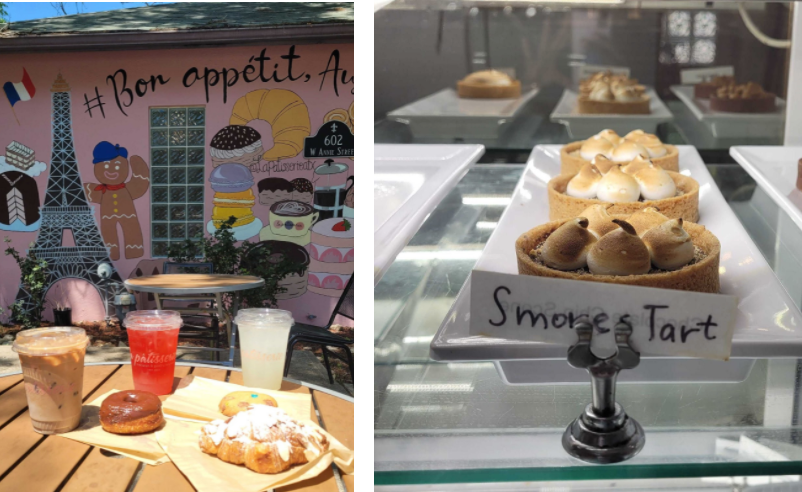 I was captivated by the array of choices and it honestly took me a second to decide what to get. In all, we got an almond croissant, a chocolate iced churro-donut, an m&m cookie, and some drinks. Let’s talk about this almond croissant y’all. Can you say buttery? Can you say airy? It was deliciously flakey and was filled with an almond paste similar to marzipan, but smoother in texture. I was and still am obsessed with that croissant. In fact, I went back a couple days later just to get another one. It was amazingly light too. With all the almonds and filling, I was expecting it to be quite heavy after eating, but it was lightly filling and left a wonderful taste behind. 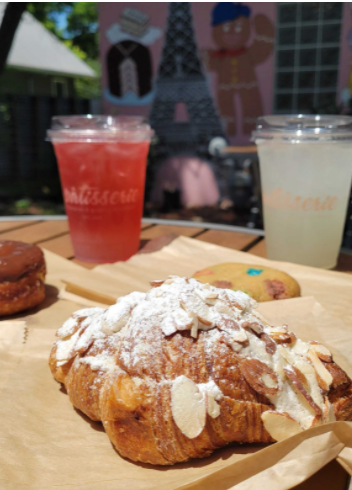 Now I can’t speak for the cookie, or the churro donut, but I can tell you that they looked amazing. The churro donut had a shiny chocolate icing on top that got a little melty when we got outside. The dusting of cinnamon sugar looked evenly distributed around the donut, and it gave the donut a crispy exterior much like a churro. The donut was also filled with a vanilla cream that looked glossy and thick. Almost like a vanilla pudding and very unlike cake frosting. As for the cookie, the use of a chocolate candy with brighter and a larger variety of colors gave the cookie a very happy look. Now when I was looking at the cookie, I could tell it was one where the exterior is crunchy, but the interior is soft and chewy. You can tell by the light golden color around the edge of the cookie and the ombre to a lighter golden in the center. All I know is that we all enjoyed our pastries, and I enjoyed mine so much that I went back for a second time. This will definitely not be my last time going though. I think next time I will get my hands on a kouign amann (a croissant like pastry) and one of their s'mores tarts. Until next week,


I hope you eat something delicious!

I’m grateful for the hell-scape of I-35 for ONE REASON AND ONE REASON ONLY....

I grew up in a tiny little town called Troy, that is literally cut in half by the massive I-35 highway. So, I guess you could say that my hatred of this horrid highway is deeply rooted in my psyche. Mostly because it’s where I had to learn to drive in a standard Jeep, that was older than me, and went 0-60mph in like...5 minutes. But I digress....

The thing about I-35 is that it's constantly under construction since 1956, never has a cone not graced its pavement. But, there is one good thing that came from this construction in 1963. During a drilling test, the Texas Department of Transportation discovered a millenias old secret lying below the growing city of Georgetown, the Inner Space Cavern! 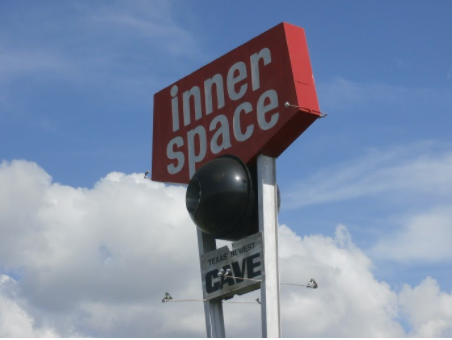 Now the cavern itself is millions of years old, made by a natural water reserve running through the limestone underground, but it was cut off to the world by about 35ft of limestone around 10,000 years ago. I love the history of the guys who were the first to drop down into the cavern. Number one, they’re called “Spelunkers” (which is probably my favorite word); and point ‘B’, they were literally just dropped down a two foot hole while being strapped to some rando’s truck. Which is a quintessentially Texan thing to do, “We found a hole, let's strap some guys to Jeff’s Ford and plop those suckers down in there to poke ‘round”. 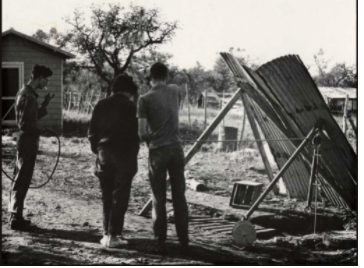 And boy did they poke! The ~SpELuNkeRs~ surveyed over 7,000 feet within the first few days! It would take over 3 years to fully discover all of it and make it tourist ready. Which is something that little Amber would grow to really appreciate once a year during school field trips.I remember the long and bumpy bus ride, kids screaming, everyone talking about how someone was gonna get lost amongst the stalagmites and be forced to live like a golem for the rest of their days...ya know...kid stuff. But then… everyone grows quiet as soon as we see that blinking red light atop a sign stating “INNER SPACE CAVERN” . 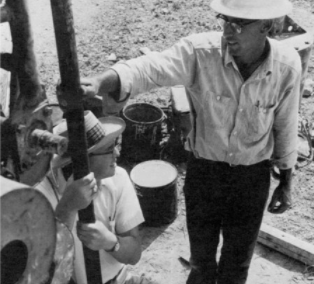 On the many pleasant visits to the cavern that I made over the years, I learned so much about this “literal” hidden secret of Texas. They found so many fossils belonging to animals that had either fallen down in an opening to the cave, or stuck in the thick mud puddles below, unable to make it back to the surface. There was a giant sloth, a baby mammoth, a saber toothed tiger; basically damn near the entire cast of “Ice Age” the movie (Ray Romano excluded). I found out that the huge stalactites and stalagmites were made by millions of years of a leaky roof, slowly depositing minerals as it dripped, unheard by human ears for millions of years. THAT YOU SHOULD NOT TOUCH AND GET YOUR GROSS CHEETO-DUST COVERED FINGER RESIDUE ON TYLER!!!!!!! Sorry...I’m still holding onto resentment, for the kid that broke the very simple tour rules.

There's something undoubtedly beautiful about the imperceptible echoes, and the amber lights making shadows dance across the walls from tours of kids, adults, and everything in between. I always felt sad coming back to the surface on the rickety elevator that had previously been our ride down to this other beguiling world. But then you see that ‘ol Texas sun for the first time in a few hours, and little kid you feel like Indiana Jones at the end of “Raiders of the Lost Ark” waiting to tell everyone about all the impossible things that you saw. 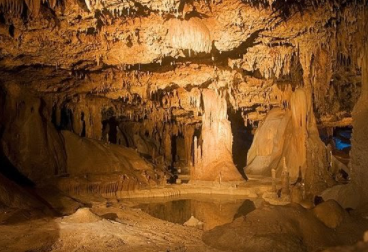 The Inner Space Cavern is one of the coolest things in Texas, I still think this as a grown-up. It proved to me that the ages-old saying is true… beauty is nice, but it's what's on the inside that really counts.

Copy and paste this list into your notes: to fill out and add it in after!