BIG NEWS: Texas Humor is starting a fantasy football team! The winner will receive a Texas Humor gift basket. Hurry, there's only 20 spots left so sign up here and pick your players!

Did you know 15 cities in the United States go by the name "Paris?" I didn't until, yesterday.

It's comes to no surprise that most of them have created their own Eiffel towers. It was in 1993 when both Texas and Tennessee decided it was time for their towns to pay homage to their namesake. And with Texas' standing at 65' tall and Tennessee at 60', Texas had a hold on the title for the "2nd Largest Eiffel Tower."

However, in 1998, Tennessee took it upon themselves to to try and top that height by an extra 5 feet (70'), and Paris, Texas no longer lived up to being the "2nd largest". So Texas fixed the problem the way any Texan would and should...

They topped off their Eiffel tower with it's very own cowboy hat!

Unfortunately, they were only able to resume their reign on the title for just a bit longer, because in 1999 Las Vegas built their 540 ft Eiffel Tower right off the strip. But, while they now hold the title, theres only one question to ask. What's better? A Replica that's half the size of the original, or a replica that knows how to rock a red cowboy hat? I hope y’all have had a good week so far because it has surely been a long one for me. I think when I am having long weeks, my favorite thing is to just relax over a bowl of soup. Obviously, it is still summer in Texas, so it’s definitely not the normal time to be eating soup, but I don’t think there is anything more comforting than a hot bowl of soup. That’s why I am excited to share this next spot with y’all because not only was the food delicious, but the atmosphere was so relaxing to be in.

If you love soup, then you are probably a big fan of ramen noodles. Let me be clear, I am not talking about the one that comes in the plastic at the grocery store, I am talking about restaurant-style ramen noodles. With the thick noodles, thick cuts of meat, and toppings galore, restaurant-style ramen is a force to be reckoned with. That is why I want to introduce you to some of the best ramen noodles I’ve had in a long time. Located in Austin, Texas, Ramen Tatsu-Ya is a ramen lover’s dream. When you walk in, you are lead to a table or to the bar where you can order and pay from your phone the entire way through. The only time you need to talk to a waiter or waitress is to ask for more water. The system is very easy to navigate, but if you feel like you’d have trouble no worries, there are waiters and waitresses on standby to help you.

Let’s talk appetizers for a second. My waiter graciously let me know that the best course of action is to order your appetizer before ordering your ramen. Now, you’re probably thinking “Cassie, isn’t that what you normally do?”, and you would be correct! However, because of the ordering system they use, if you order your ramen and appetizer at the same time, it is likely that you will get your ramen before the appetizer! So make sure you place that appetizer before adding the ramen to your order. This will ensure that you get things in the order you want them to come. The appetizer I chose to get was the gyoza or potstickers. They came with a soy sauce on the side, and, honestly, I didn’t even need the soy sauce. 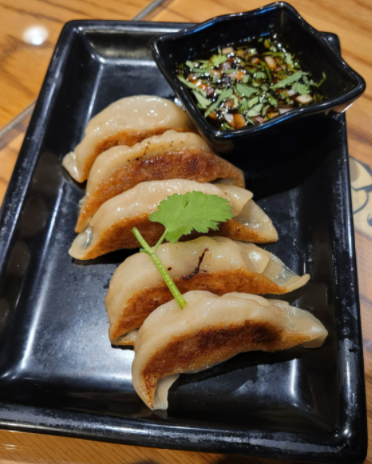 The dumplings on their own were so flavorful and juicy that when I added soy sauce it kind of overshadowed the original flavor. I would recommend that you try it both ways and pick your favorite.

Moving on to the main attraction, the ramen. I ordered the Tonkotsu Original and added menma (bamboo shoots) to my toppings. 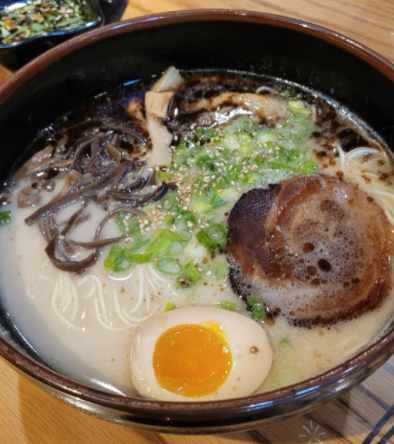 What I love about tonkotsu ramen is that the broth is so creamy and thick without the use of any cream. I’m not sure how they do it, but it is so comforting to eat. Especially the tonkotsu ramen at Ramen Tatsu-Ya. The cuts of pork were thick and peeled apart so easily and the noodles were perfectly cooked. While the broth is pork based, and there were pork cuts in the ramen, I felt like the soup wasn’t too meaty. I didn’t feel like I needed to take a tum or anything because the broth was so smooth. Honestly, I don’t have a whole lot to say about the ramen because it was so good! It was flavorful, filling, and comforting. I think if I was to go back though, I would try the Mi-so-hot ramen which is a miso-based ramen with a hot chili paste.

I hope y; all get the chance to check Ramen Tatsu-Ya out, but, until next time, I hope you eat something delicious!

The Lady of White Rock Lake,


Well, it's September so you know what that means.. HALLOWEEN IS RIGHT AROUND THE CORNER! The way I plan on bringing in the Spooky Spirit is with some ghost stories, and y’all are coming along with me!

This story starts in Dallas near the White Rock Lake area, more specifically Gaston Avenue. It's here on this unassuming residential street in the mid-60’s where a woman drenched in water wearing a white dress was seen hailing cars in hopes of a ride.

Once in the good samaritan’s car she would request to be dropped off at a specific address on Gaston Avenue. However, before the  new companions would arrive at the address, all that would remain in the back seat would be a puddle of water where the young woman just was. This story has been told and re-told over decades, even experience first hand by some unlucky few. Versions of this story very in some details but the frightening fundamentals remain: young woman, soaked white dress, and the address on Gaston Avenue.

One of the witnesses to this woman in white went to the address given to her by the ghostly figure the next day in the safety of daylight. While there, she discovered that in the beginning of the 1920’s a family lived there that had a teenage daughter that drowned in the White Rock Lake. Now, there’s no proof of this conversation really happening other than a brief mention in an old Dallas newspaper, but it doesn’t not make sense.

So what do you think? Is there a woman in white walking the suburban streets of Dallas, or is this story just another dead end?

Sign up for The Texas Humor Fantasy Football Team HERE

The winner at the end of the season will receive a Texas Humor Gift Basket!