As always, welcome back to the Texas Connection. Grab your cup of coffee (or your Margarita) and read this week's interesting finds from your Pals at Texas Humor. 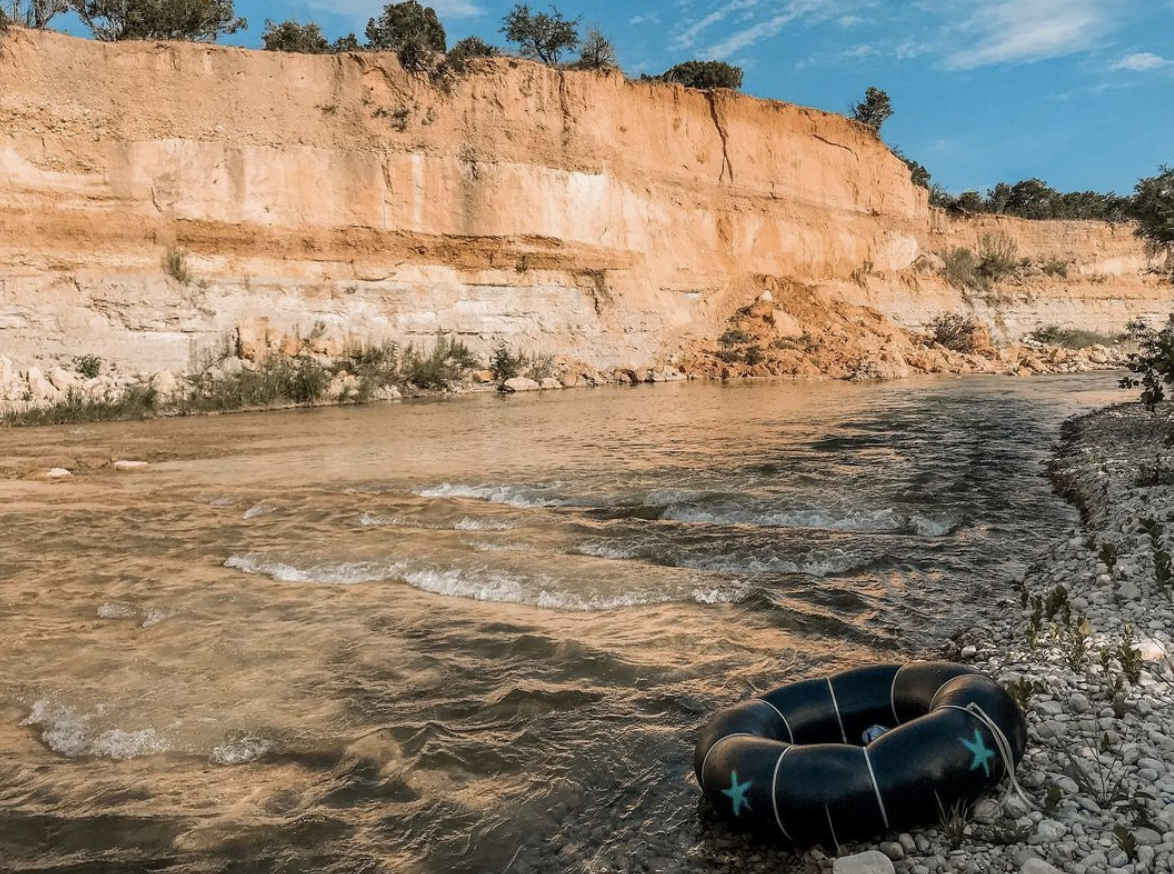 As George Strait once said, “I remember that old Frio River, where I learned to swim”.. and it brings to mind another gem deep in the Heart of Texas. We’re talking Garner State Park, located just off Hwy 83 in Uvalde County ( AND YES – that is THE Uvalde County that also brought us Mr. McConaughey.)

In the early 20th century, there was a rise in vacation camping as more and more people began owning cars. It was then that the Magers family began opening up pieces of their land to the public. With all the natural beauty in the surrounding area, it was an ideal camping environment. It was shortly after, with the onset of the Great Depression, that the Civilian Conservation Corps (created by President Roosevelt to help provide jobs) built what we know today as Garner State Park.

There’s plenty of activities for everyone down in Garner State Park. You can swim and float the Frio, catch a couple fish, hike and get a glimpse of Old Baldy, camp under the stars, dance and more!

With plenty of options of renting tubes and hopping in the river, it's guaranteed that you’ll be able to get some time in the water. If tubing ain’t your thing, find yourself enjoying the scenic views of Texas across almost 1,420 acres of land, and many miles of hiking trails. And to make sure you get that perfect sleep, wear yourself out at the Pavilion amongst all the park visitors as they two-step the night away all summer long.

So pack your RV, or tent, or maybe you just need to rent those cabins, because this is the place to be EVERY summer! You can find more information about the park and make reservations HERE.

*and if you decide to sport some of my favorite Texas Humor gear on the river this year, make sure to tag @TexasHumor!

This was an exciting week! I went to a restaurant that I have been dying to go to for awhile now, but I had never been able to go because none of my friends like to eat… raw sushi. Now, I don’t know how y’all feel about raw sushi, but I love it. A friend of mine finally agreed to go get some with me, and I knew we had to go all out!

For lunch, we went to the Lowkey Poke Joint in Addison, TX. For those of y’all who don’t know, poke is a Hawaiian dish that features a bed of rice, toppings of your choice, and raw fish covered in sauces to top it. At the Lowkey Poke joint, you can get a regular poke bowl, or, you can get what I got. The reason I was so excited to go to this restaurant was because they have sushi burritos, sushi tacos, and sushi nachos y’all! 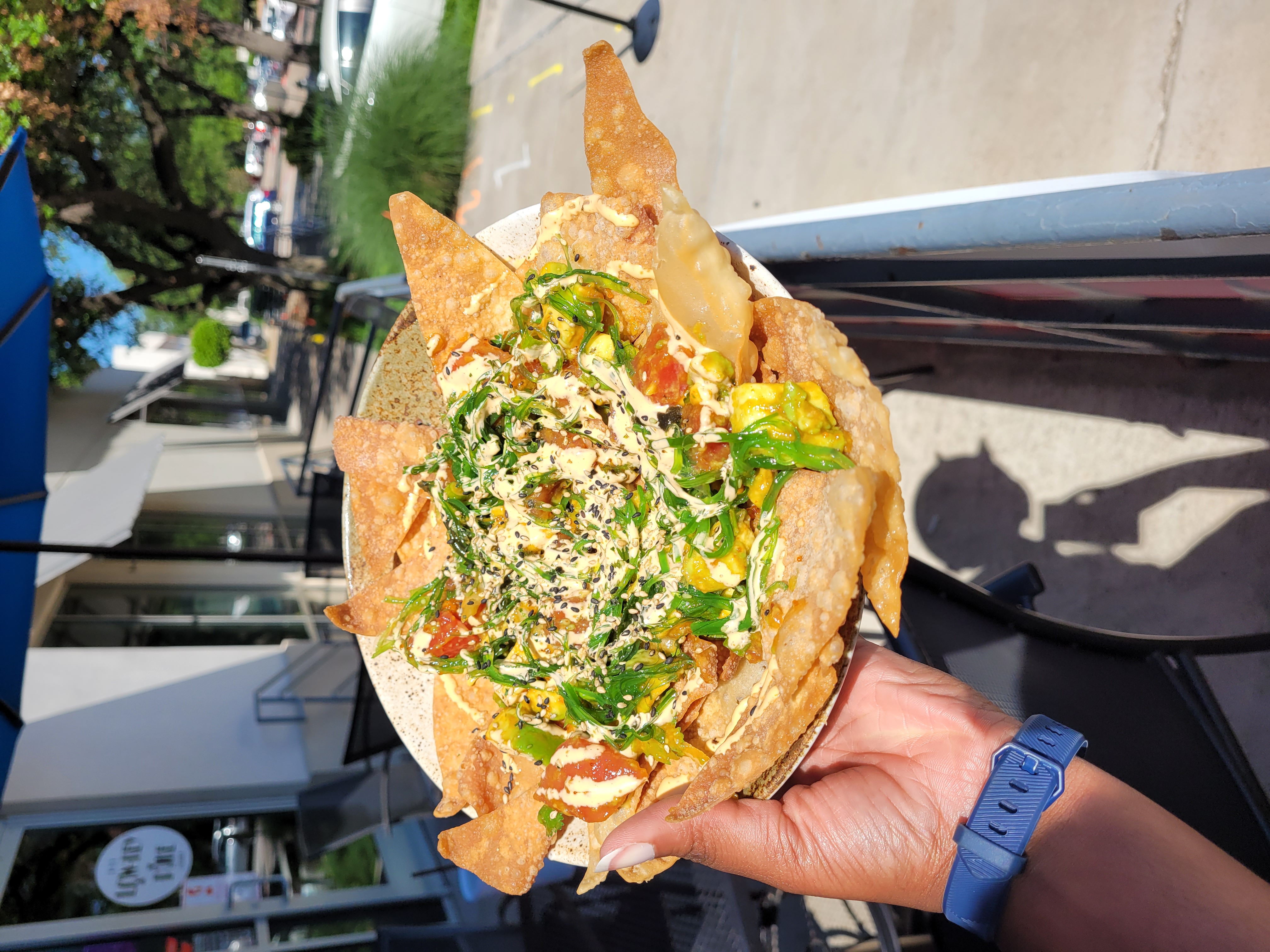 I ordered the nachos and the tacos because y’all know I had to, and my friend got the sushi burrito. Let’s start with the nachos. Our appetizer, our first taste, our first glance at what our other food would taste like. The nachos were a bed of fried wonton paper, topped with some sauced up and seasoned tuna, some seaweed salad, green onions, avocado, and covered with a sriracha mayo. Y’all this was fricken delicious. The crispiness of the wontons and the chewiness of the fresh tuna was a perfect combination, and the spicy sauce and spices on the tuna took it to the NEXT LEVEL. I thought it was funny though because when I asked for the spicy sauce the waitress said “it’s really spicy”. I did not believe her one bit y’all. HOWEVER, to be fair, to be honest, it was a slow burn. I didn’t feel the heat until I was almost done with the nachos and completely out of water! 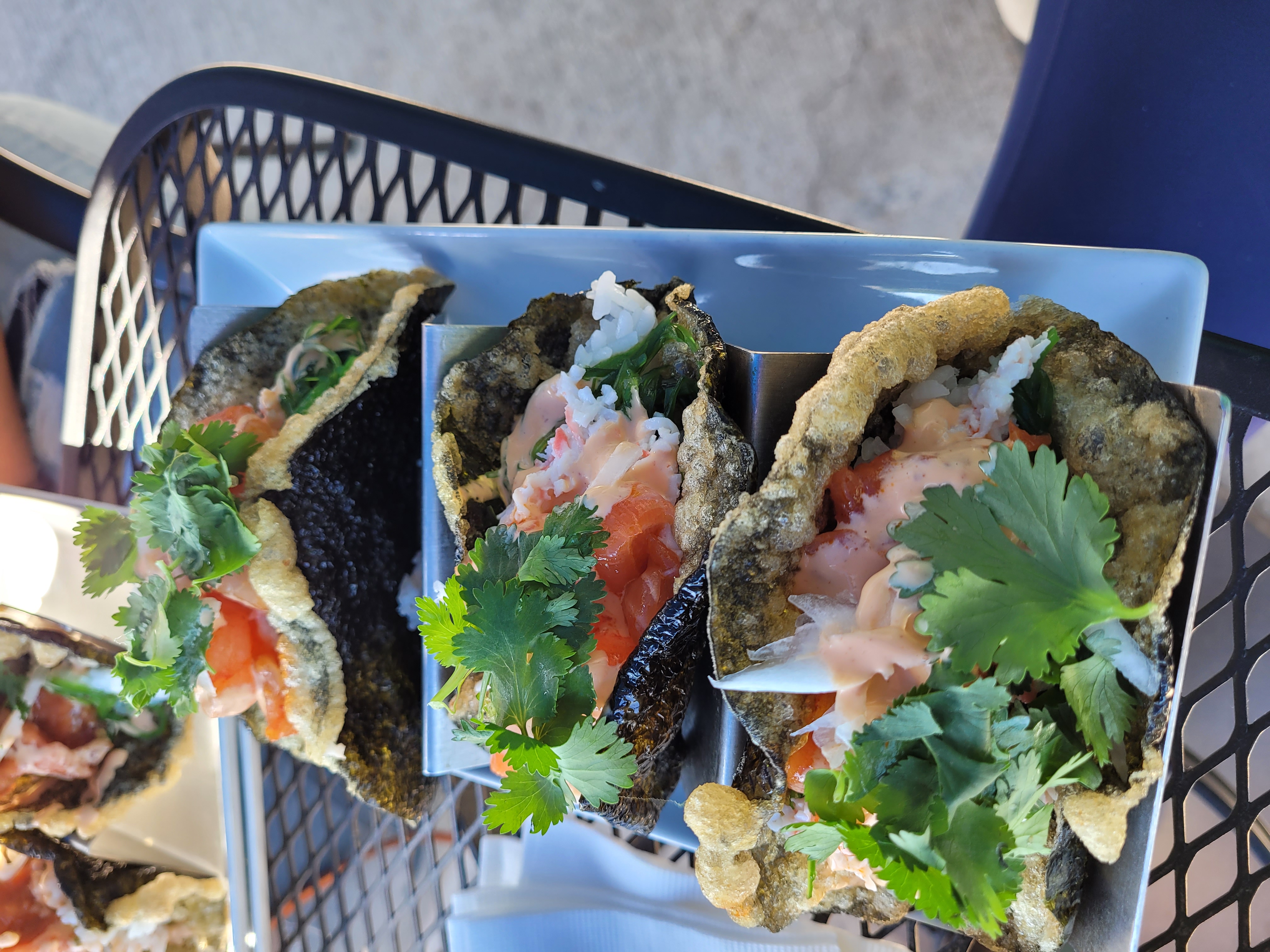 As for the tacos, they also did not disappoint! The “tortilla” was actually deep fried seaweed formed into the shape of a taco shell. It was crispy and great alongside the fresh salmon and yellow tail. I went for the same spicy sauce on the tacos as well, and they were topped with that same seaweed salad, some masago, fresh onions, crab meat, the sriracha mayo, and cilantro. The flavor combinations were amazing, and the textures were perfect. While I highly recommend the tacos and the nachos, the main attraction that you should think about getting is D E F I N I T E L Y the sushi burrito. 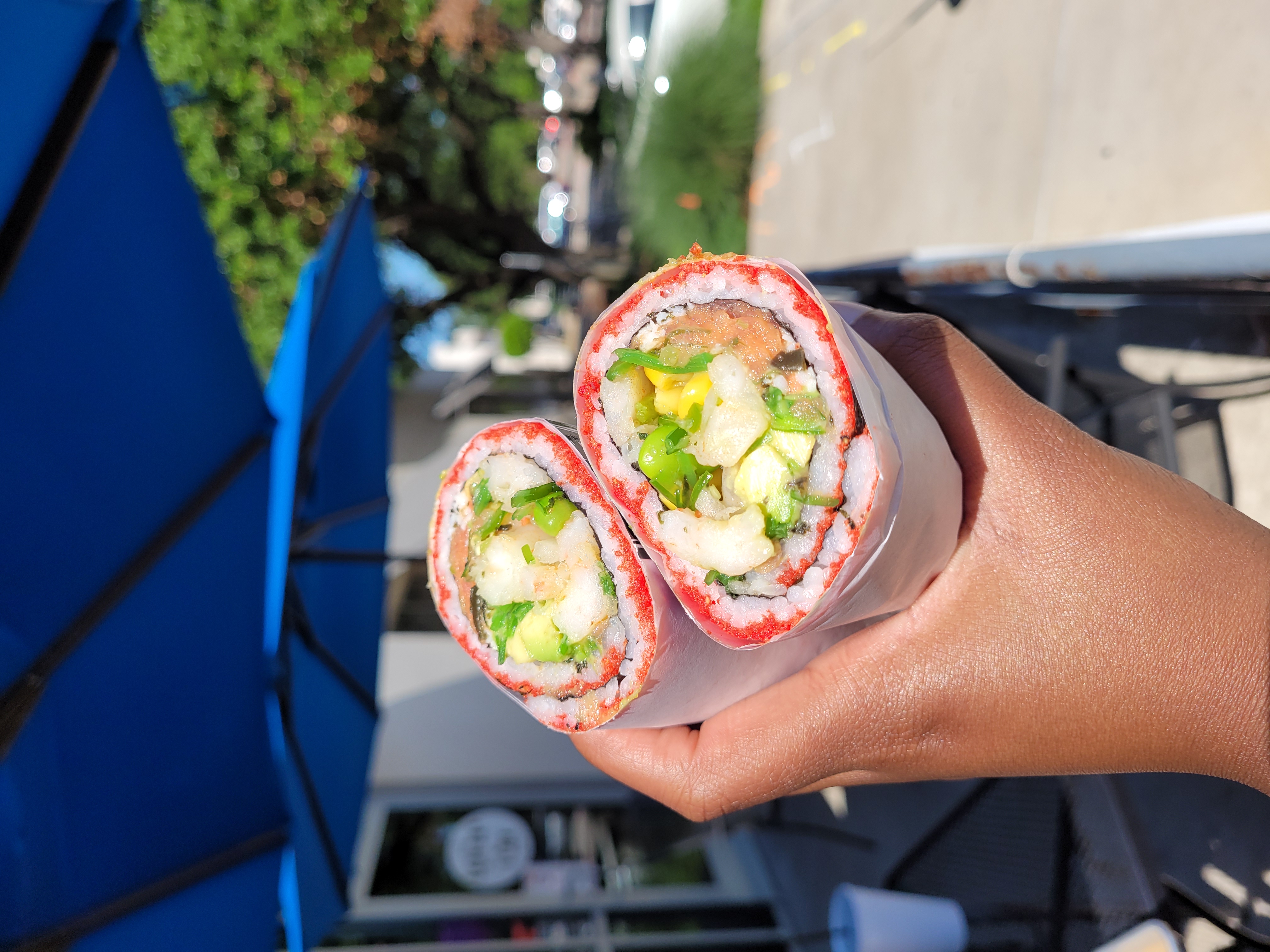 My friend ordered the sushi burrito with a flamin’ hot cheeto crust, and a filling that includes salmon, shrimp, edamame, avocado, corn, and plenty more toppings! She said that she wasn’t sure about the hot cheeto crust at first, but when she tried it, it all fit so well together. She got a sriracha mayo sauce on her salmon and shrimp, so the hot cheeto dust only adds to the heat. All of the food was delicious, and I am so excited to go back. I hope y’all get the chance to try the Lowkey Poke Joint soon, but, until next week,

I'm sure we all grew up with grand tales of the Texas Rangers taming the Wild West. Well, at least I did, because my dad was a huge history and western nerd. With this being said, one of his favorite tales to tell me was the true story of the man that brought down the infamous Bonnie and Clyde. 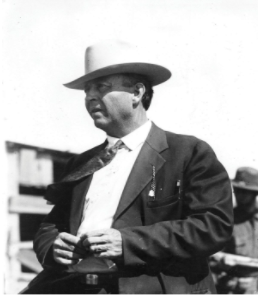 This man was none other than Texas Ranger, and all around bad-ass, Francis Augustus Hamer. Now, this guy did a lot more than just capturing the two most notorious bank robbers of the 1900s. Born in 1884, in Fairview,TX, this guy was said to have been shot up to 17 times; with some bullets even staying in his body until the day he died. The first time he was shot is actually a pretty crazy story. He was 16 working for some wack rancher named McSween, who then asked 16 year old Frank to basically murder a rival rancher. Hamer said no, and by doing this he sealed his fate of getting shot in the back at close range WITH A RIFLE!!!! There's a story that goes on to say once Hamer healed from his injuries, he went back and got revenge on ol’ McSween by shooting and killing the man on his front porch. However, some people contest that, but as a petty person, I like to think that it's true.

Hamer always had a penchant for bringing down what he saw as injustice. He went from a marshal to a special investigator, to a deputy sheriff, to eventually the Sr.Captain of the Texas Rangers. In that time period alone he had physically threatened a corrupt member of Congress, rescued at least 15 people from lynchings, and stopped a ring of assassins for hire. Yeah I know, in the early 1900s Texans were wildin’.

All this seemingly ended for Hamer once Miriam “Ma'' Furguson was elected Governor of Texas, and he left the Rangers. Everyone says it’s because Hamer was extremely sexist towards women and immediately quit once “they elected a woman governor”. But I’m calling cap on this. Ma Furguson was insanely corrupt, and was on her way to basically disband the rangers to replace them with loyal cronies that would look the other way given the price was right. So I think he, along with dozens of other rangers, left not because of a woman becoming governor, but instead because THAT woman was becoming governor. Also so he could retire with some of his commission intact. 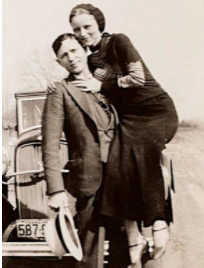 Hamer made a living in private security for the next two years, seemingly leaving his law fighting’ in the past. That is, until Bonnie Parker and Clyde Barrow went on a crime spree that left Ma, and the rest of Texas reeling for revenge. That's when Lee Simmons, a prison superintendent and peer to Ma Furguson, asked Hamer to come back for one last job… bringing down the Barrow gang.

At the ripe old age of 50 (not a roast lol, it's just older for the time period...also dude had a rough life) Hamer began his pursuit. With former co-ranger Ben Gault, they managed to track the gang down after basically living in their car for months, working crazy hours and only eating Vienna sausages, they tracked down the exact location that Bonnie and Clyde would be driving past. With this information, Hamer and a group of other officers prepared an ambush atop a hill at Bienville Parish, hidden from Clydes sight. It's pretty bleak from there unfortunately, as Hamers plan to capture them alive went to hell when a young deputy took it upon himself to open fire on the Ford V-8 containing both Bonnie and Clyde. This led a rapture of bullets into the car, and the two most famous anti-heroes of the century were dead.

After this, Hamer was extremely distressed about the horrific death of these two 20 year old kids, as well as the subsequent attention and barbarism from the public. He officially retired for good in 1949, and lived some-what peacefully until he died in his sleep in 1955 at the age of 71. And that's a super brief history of the true Texas “Hamer”, an impressive man, with a complicated life, and a whole lot of buckshot under his skin.

How well do you know George Strait? 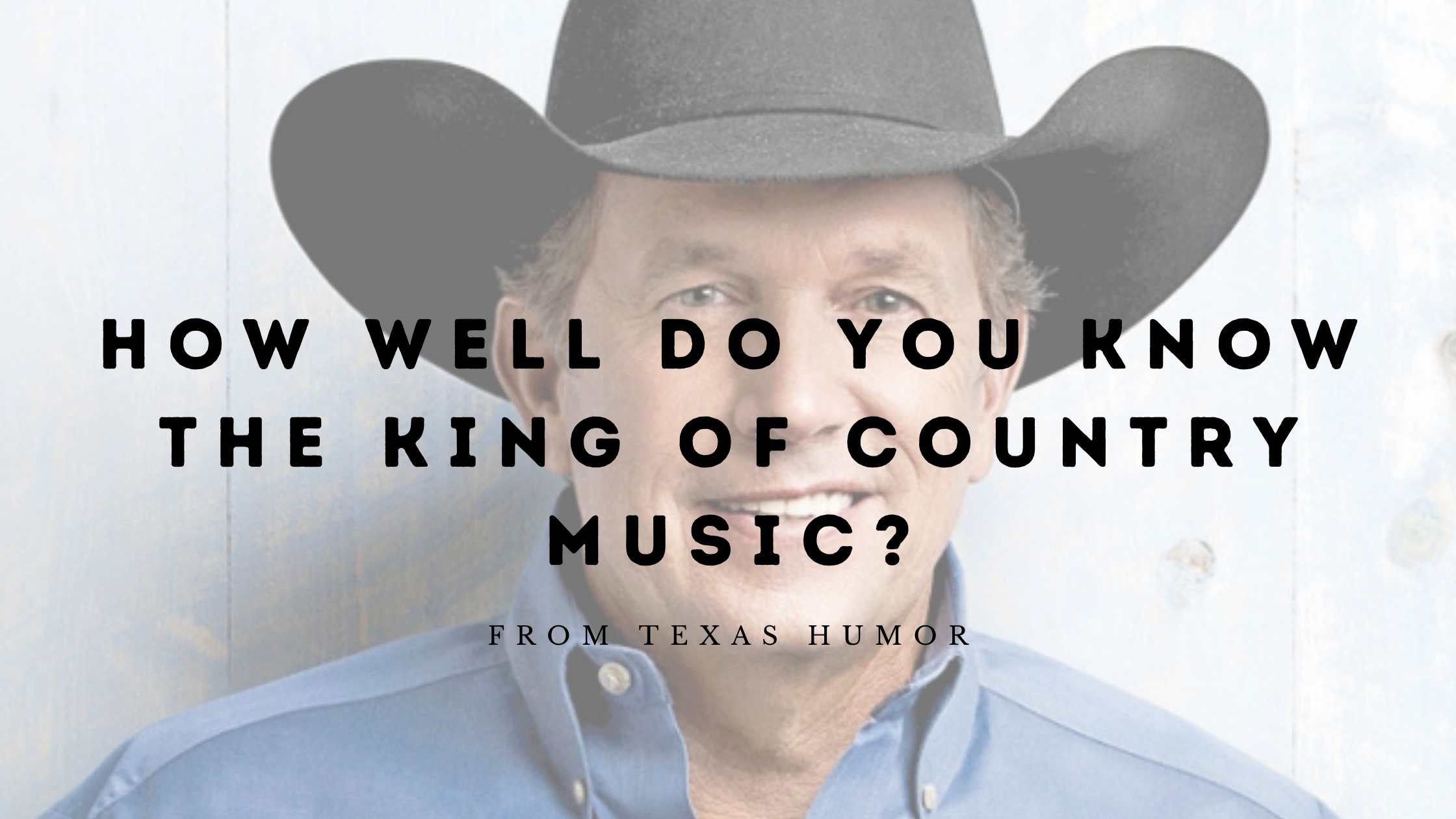